Designing a better voting experience for everyone

The voting ballot is one of the most important interactions between government and its citizens. It’s the interface through which citizens decide the type of society they want to live in. Done well, the voting process can be a positive, empowering experience. But in so many cases, it can be a frustrating and confusing one.

This isn’t just a matter of opinion. Fifteen years ago, the 2000 US presidential race between Bush vs Gore was said to have been swung as a result of poor ballot design in Palm Beach County. In Ireland too, ballot design continues to be a contentious topic. 55% of those surveyed following the 2013 Seanad referendum claimed they found it difficult to understand from the ballot paper what they were being asked to vote for. 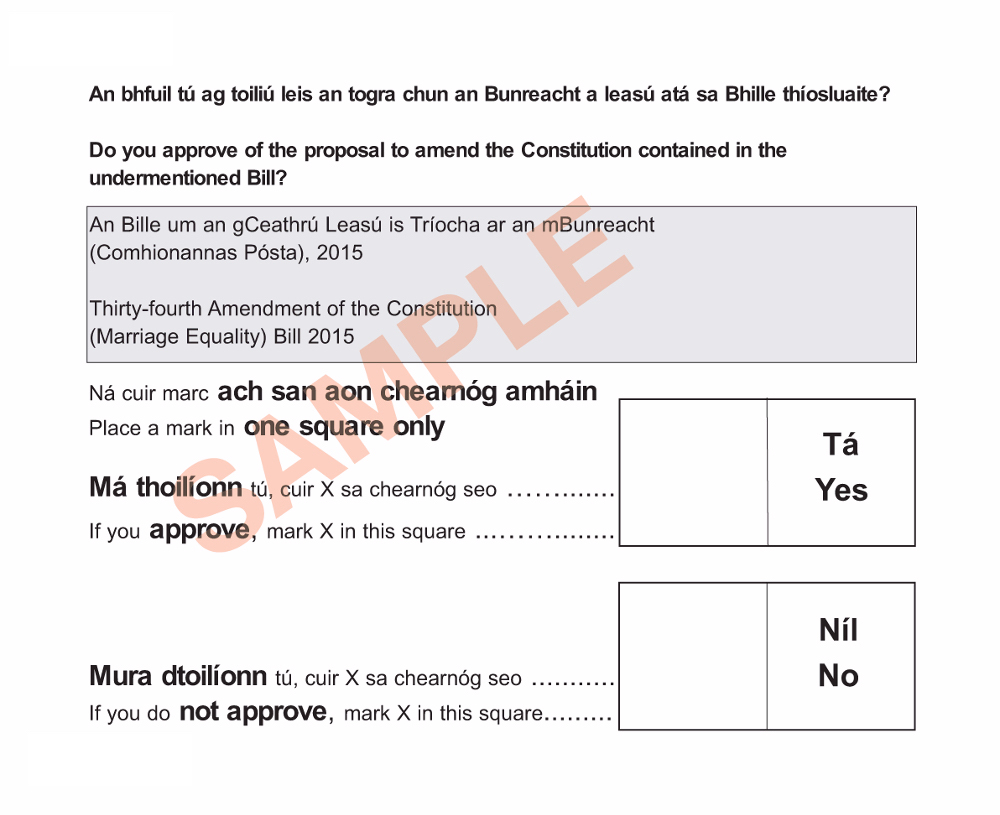 The intentions that lie behind ballot papers can be highly political. The 2014 referendum in Crimea, for example, gave voters two options to decide whether to join the Russian Federation, but neither option was no.

More often, the intentions behind a ballot’s design are sound but poorly executed. Theresa LePore, the designer of the infamous butterfly ballot in 2000, used her specific design in order to improve the ballot’s legibility for the visually impaired.

One of the biggest challenges facing ballot designers is the complexity (or rather simplicity) of required information. Elections pose a particular problem given the large number of candidates, but referendums carry their own difficulties. Multiple languages and instructions all compete for attention, resulting in long, complex ballots.

For designers, ballot material provides a unique challenge. Good visual design should not only communicate a clear message, but should also help the users in their decision making process. When it comes to designing a ballot, and supporting material, the designer's aim is to avoid any suggestion of design architecture.

Confusion is a failure of design, not an attribute of information.

By applying some straightforward design principles to the Irish referendum ballot, we’ve shown that it’s possible to overcome these challenges, transforming the ballot into something more understandable, efficient and trustworthy.

From signposting outside the polling stations, to understanding the necessary interactions with polling staff, it’s essential to understand the context in which voting takes place. The voting experience does not begin and end with the voting the ballot paper.

In order to overcome some of the main issues surrounding the 2013 Irish Seanad referendum, we’ve designed a set of instructions to be placed where voters need them; in the booth itself. 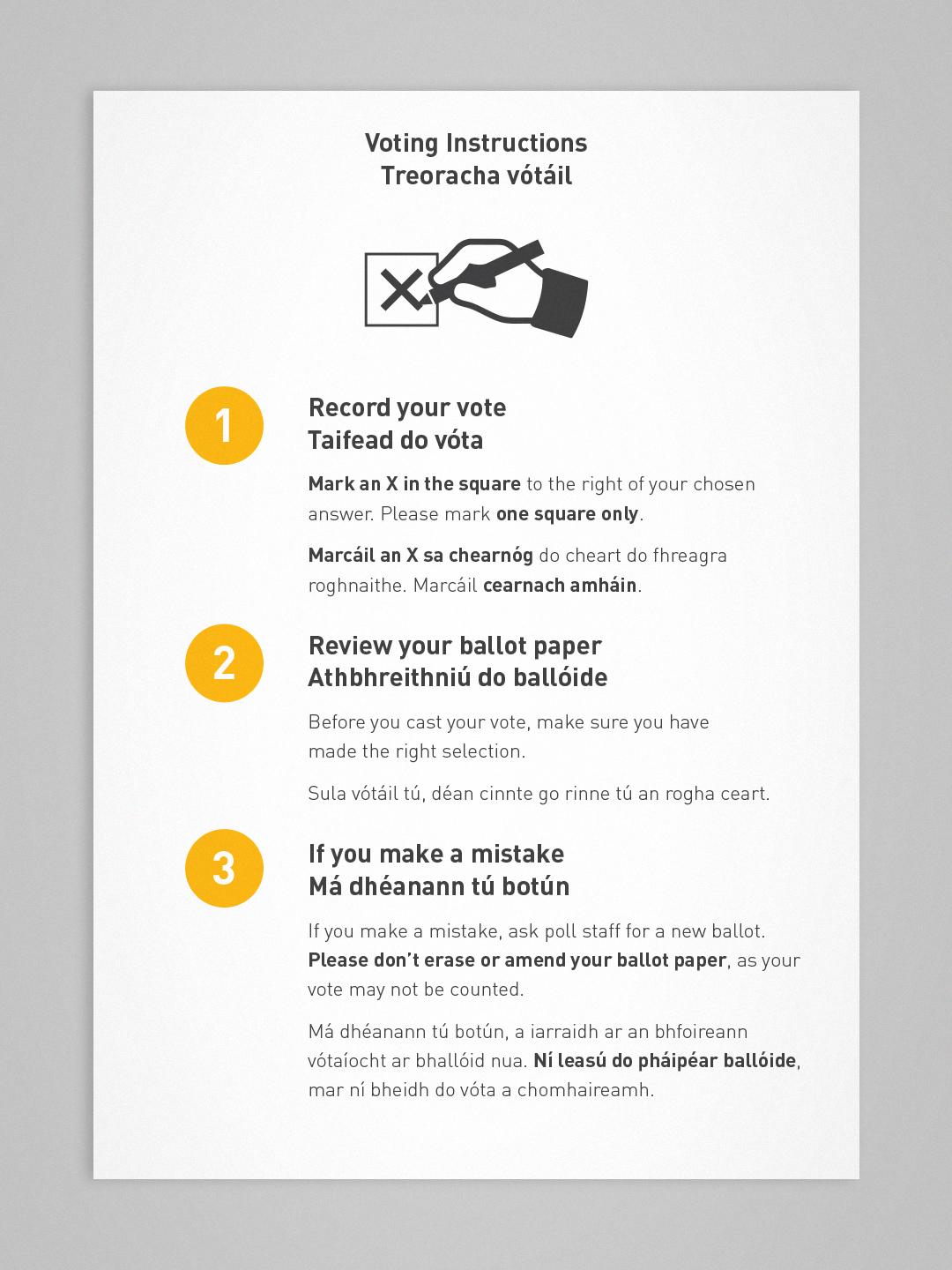 Contrast attracts attention. It’s one of the simplest ways of helping users categorise different types of information, showing voters where one piece of information starts and the other ends.

Through the use of shading and colour, we’ve highlighted key information such as instructions and explanations, focusing the user’s attention on them and providing a safeguard against misrecorded votes. At the same time, the use of contrast helps define boundaries between two different types of information - the instruction and the action. 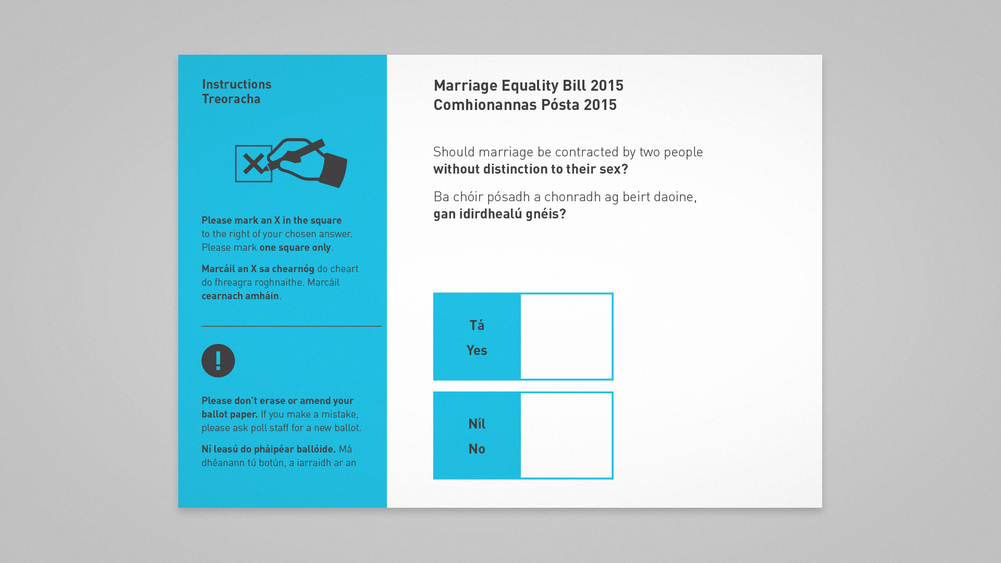 How information is positioned on a ballot sheet has a big impact on how it’s perceived by voters. Where do you want voters to look first? What is the information you need to draw attention to? A clear information hierarchy should guide the user from one element to the next, in a flow that corresponds to the content’s message.

The existing referendum ballot gives no clear indication at the top of the ballot as to what the referendum is about. By re-positioning the title as the highest-level information on the page, we can give voters a clear introduction to the topic that the information that falls below it.

In order to effectively and accurately record their vote, voters shouldn’t be forced to hunt for the straightforward information.

A frequent complaint made against ballots is their over-reliance on complicated language – this complaint has a lot of merit, some 17.9% of Irish adults read at the lowest level of the literacy scale. Plain English, words that have high frequency of use in the everyday language of voters, is understood better than low-frequency words. By using these short, familiar words, we can ensure that ballots are easily distinguished and read faster.

The use of plain language is not only a means of ensuring that a ballot is not misunderstood, it’s also a means of ensuring voters feel part of the democratic process. When so few can share in the language of a ballot form, voters assume that elections are difficult, confusing and complicated, reinforcing cultural barriers and biases about voting. 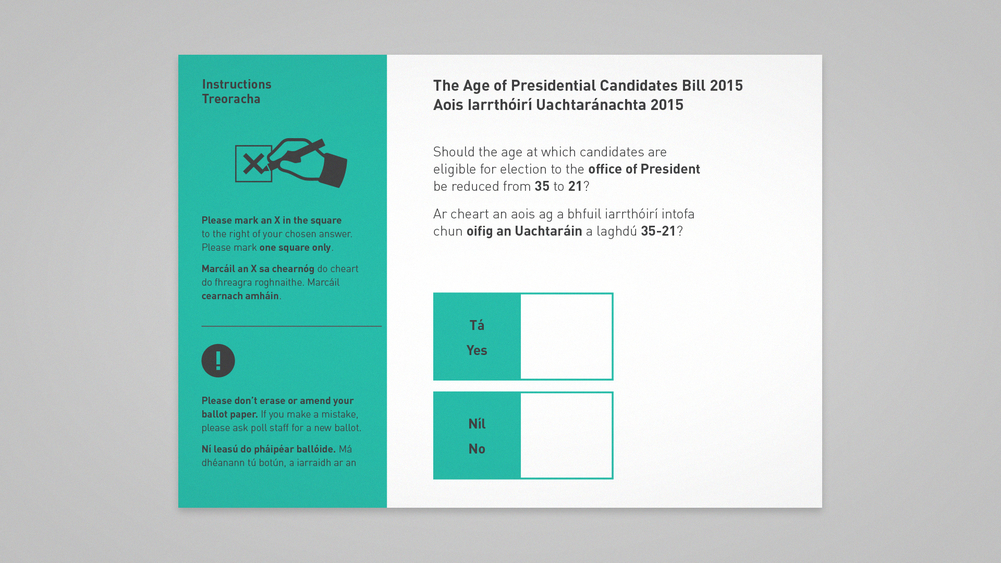 When we read a page, we don’t see letter, we see words; words as a whole rather than the sum of their parts. Ophthalmology, the study of the eye, has told us that the more the letters are differentiated from each other, the easier is the reading. The human eye craves these different textures and comparative contexts.

Most ballot forms use a single point size, presenting voters with an undifferentiated wall of text, making it difficult for readers to parse information simply and to detect changes in meaning. A contrasting variation of large, legible font sizes helps readers quickly identify words.

As designers, much of our working day is spent questioning, rearranging, and rethinking how we communicate. Underpinning this is the belief that words and objects should be used responsibly, to communicate truthfully and honestly to our audience. When these communications are to have a profound impact on the future of a country and its citizens, this responsibility becomes only greater.

Despite a number of well-intentioned campaigns on the part of the government, the existing infrastructure and interactions of voting only serve to alienate some of the country’s poorest and most vulnerable. It’s the government’s ballot forms, voting booths and signage that deliver this message.

By involving skilled information designers in existing electoral systems,  it’s possible to ensure that elections are not won or lost on voters’ ability to understand unnecessarily complicated interfaces, but on the democratic  choices preferred by the majority of voters.

We'd like to thank the National Council for the Blind of Ireland for their consultation during these designs.